The World Poker Tour only began visiting Australia in the past few years, but the tour stops were immediate hits with players. Players turned out in big numbers to previous WPT Gold Coast series, so organizers hoped the same would happen for the World Poker Tour’s first series in Sydney.

It was not the same, though; it was better. The entries for the WPTDeepStacks Sydney Main Event became the largest WPTDS Main Event in the series history. Players and organizers alike declared WPTDS Sydney a roaring success.

The schedule for WPTDeepStacks Sydney offered 11 events in total. Those began back on 30 March. The Main Event didn’t start until 7 April, and that one ran the rest of the series. The other ten events deserve attention, though, because of the impressive fields.

These are the preliminary event results, minus Event 7 (Main Event):

All of the winners were Australian except Event 3’s Francesco Losi of Italy.

Day 1A started it off with 554 entries, from which 85 players remained at the end of play. Day 1B added 659 entries with 94 of them surviving. The final chance was Day 1C, which delivered 810 entries, with 137 of them making it through. Those numbers made that tournament the largest Main Event in WPTDeepStacks history.

Day 2 of the tournament brought 316 players back to the tables, though dozens would go home without a paycheck. It didn’t take long to burst that money bubble, though, and the payouts began.

As the tournament thinned the field from seven to six tables, Darius Bucinkas made it to the top of the leaderboard, followed closely by Mark Fester. Najeem Ajez was in a strong third. Later that night, after Qilong Li busted in 24th place for $14,099, play stopped for the night with 23 contenders and a man named Benedikt Eberle holding the most chips. Darius Bucinskas was second in the counts.

Play on Day 3 started with Mina Elias and Dean Boskovic busting. Najeem Ajez ended up in 19th place, Leo Boxell in 17th place, and Ross Coveney in 13th. The final nine then took their seats at the final table, with Eberle back on top but only slightly above Nick Wright. Bucinkas was third, followed by Fester and Lirui Zhang. Luke McCredie was next in the counts, coming in ahead of Spencer Davies, Marco Perri, and Anthony Cierco on the short stack.

For the Big Money

Wright sent Perri out in ninth place, as Cierco doubled through Fester to stay alive. Eberle send Davies home in eighth place, and Wright stepped back in to bust Bucinkas in seventh and then Zhang in sixth.

Five-handed play started with Wright holding 24.7M chips, Fester with 14.5M, Cierco and McCredie in the 8.1-8.2M range, and Eberle on the 4.8M short stack. Eberle soon doubled through McCredie, but it wasn’t enough. A short while later, Fester ousted Eberle in fifth place.

McCredie lost a big pot to Wright, and Fester stepped in next to bust McCredie in fourth place.

Cierco soared, taking pots from Fester and Wright, though Wright remained the far-and-away chip leader. Fester changed that, though, when he took a huge pot from Cierco. Wright then took A-J and put Cierco to the test. Cierco showed A-6 and busted in third place for his best score to date.

Heads-up play began with Fester holding 31,675,000 chips to the 28,725,000 of Wright. Fester took the first and second pots in play. The third hand saw the two tangle on a Kh-5c-Qd-Jh-8h board. Fester pushed all-in with A-T for the straight. Wright called quickly with K-K and his set, but the straight eliminated Wright in second place.

Fester won the biggest pot of his poker career, by quite a lot. He told Poker Media Australia (who provided live updates for the series), “Everyone is very excited. I’m very excited, but I think when the dust settles that I’ll realize that I’m a WPT champion, and that’s awesome!” 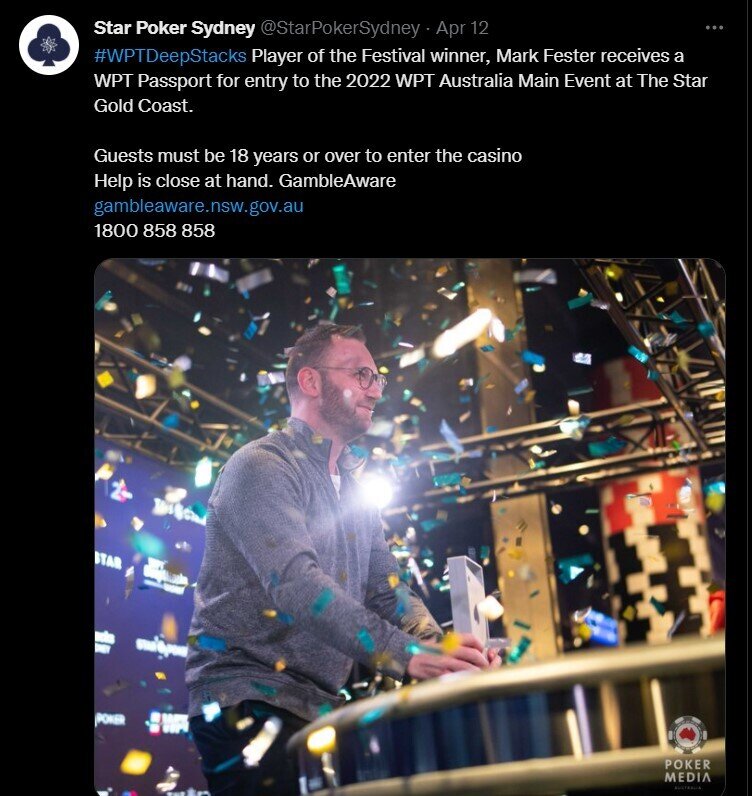 It Was a Big Deal

The World Poker Tour is a draw, no matter the location. But in a country where big live tournaments have been somewhat rare – especially since the pandemic – poker players want the action. And that action brought big names to the tables, such as: Gary Benson, Grant Levy, Jeff Lisandro, Martin Finger, Angel Guillen, Jordan Bromley, Leo Boxell, and Joe and Tony Hachem.

When it was finished, the Star reported the big numbers for the entire series:

Mark Fester also won the overall festival. For that, he won a WPT Passport that will give him an entry to the 2022 WPT Australia Main Event at the Star Gold Coast later this year.