The news took the world by storm. Shane Warne died at the age of 52 this week. It rocked the sports world, as he was a legend of the game of cricket. And it shook the poker world, as he was a longtime poker player. His participation in the game through the years endeared him to many members of the poker community.

Shane Warne was in a villa in Koh Samui, Thailand. He took to Twitter earlier in the day to express his condolences to the family of fellow cricketer Rod Marsh, who died that day. He was 74 and had a heart attack. “He was a legend of our great game and an inspiration to so many young boys and girls. Rod cared deeply about cricket and gave so much – especially to Australia and England players. … RIP mate.”

Prior to that, Warne tweeted numerous times on 27 February. He tweeted a picture of himself in prime physical shape and noted that he had just started “operation shred” to get back into that shape by July.

On 3 March, he was in the aforementioned villa with three friends. When Warne didn’t show up for the group’s dinner plans, one friend went to find him. He found Warne unresponsive and did CPR to try to revive him. He also called an ambulance. Thai Police accompanied the emergency response team to the villa. Medical professionals tried CPR for another 10-20 minutes as they transported him to Thai International Hospital. After some more CPR, he died.

Authorities did not believe Warne’s death was suspicious. They found no wounds on him. His friends noted that he had been complaining of chest pain since before the Thailand trip. The Bo Phut Police Superintendent came to believe he died of a sudden and massive heart attack.

Reuters reported that his three children were in shock, as was ex-wife Simone Callahan. Warne’s parents and brother mourned with her in Melbourne. His longtime manager James Erskine expressed his sadness as well after spending time with the family. “They can’t believe what’s happened,” he said.

Erskine did note on a television appearance that Warne lived hard and dieted hard. He smoked cigarettes most of his life. He was also known to drink. But when he wanted to lose weight and get fit, he went on “ridiculous” diets. And he had just finished one, possibly the one of which he spoke on Twitter a few days before his death.

Warne’s death shocked many in the poker world as well. He played for so many years, even served as an 888poker ambassador for a time. 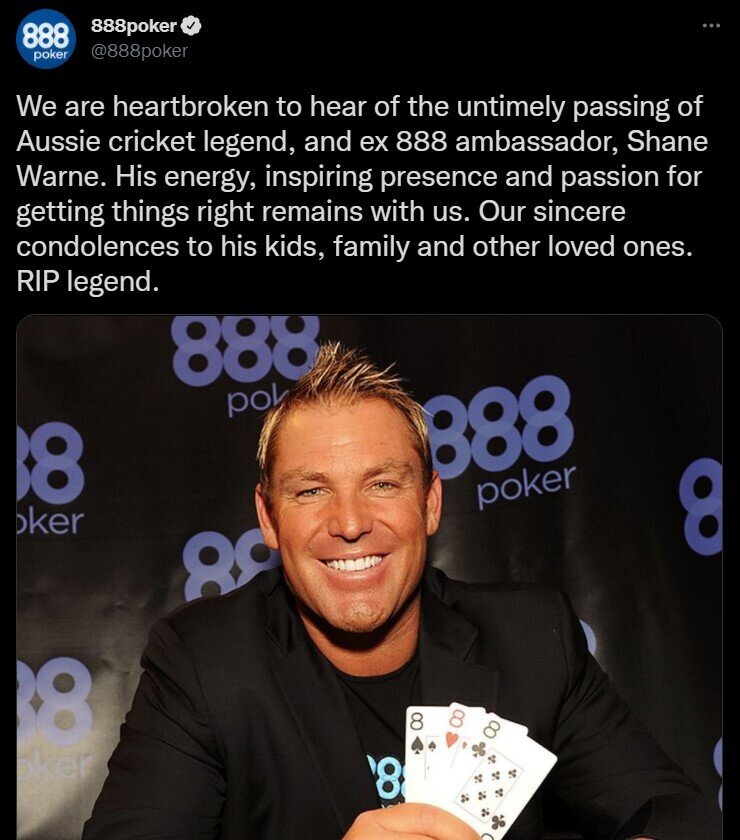 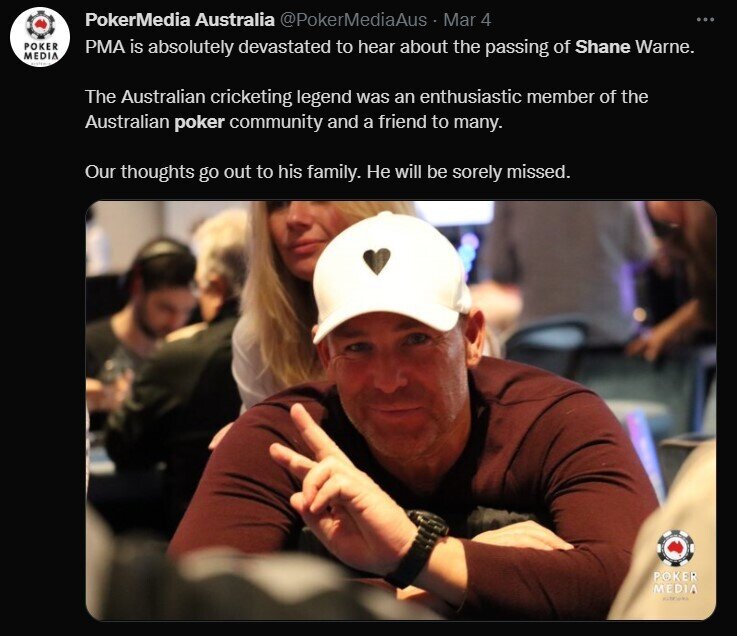 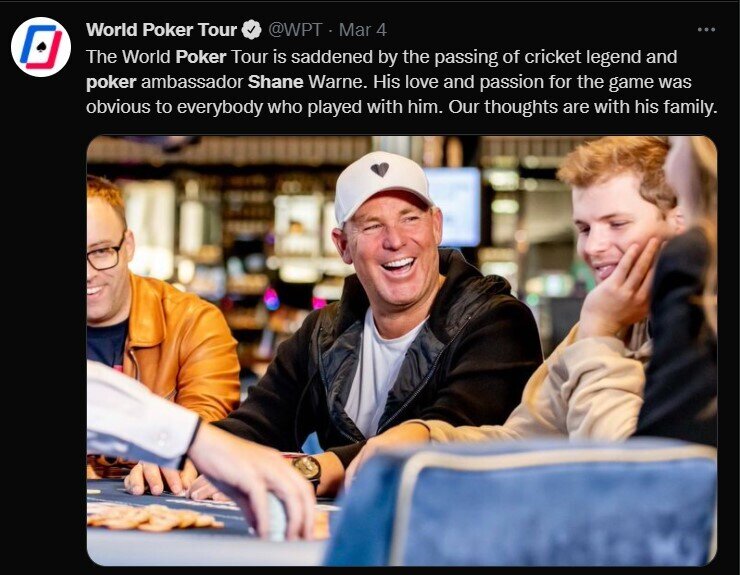 Born in 1969 in Melbourne, Warne began playing cricket in his teenage years. He represented the University of Melbourne Cricket Club before he even turned 16. He went on to play for various football clubs and play professionally. His first-class cricket debut happened in 1991.

The following year, he began to represent Australia internationally. He won numerous Cricketer of the Year awards and set records for most test runs and wickets. To date, he is the highest test-run scorer without a century. Many credit him with mastering the leg spin and reviving it. He accepted places in the Cricket Hall of Fame via Cricket Australia in 2012 and ICC Cricket Hall of Fame in 2013. Wisden named him as one of the five Wisden Cricketers of the Century and Leading Cricketer in the World.

Warne retired in early 2007. From there, he worked with various networks as a cricket commentator.

His career wasn’t without controversy. The Australian Cricket Board fined him in the mid-1990s for taking money from a bookmaker. And he had to step away from the game in early 2003 after testing positive for a banned drug. The Board ordered him out of the game for one year. And the Australian Football League prohibited him from holding any official positions.

Warne played a great deal of poker throughout his adult life. He often played cash games, not taking a serious interest in tournaments until 2009. He ran deep in the Joe Hachem Deep Stack Series that year and even made a final table at the Victorian Poker Championship the following year. That third place finished proved to be the most lucrative (A$40K) of his poker career.

While Warne mostly played poker when cricket permitted, he did find time to participate in the primary Aussie series, like the Aussie Millions. He also traveled to the World Series of Poker in Las Vegas numerous times through the years.

888poker signed Warne to a poker sponsorship in 2008. He traveled to many of their live tournaments and represented them at home at the Aussie Millions and away at the WSOP and the UK Poker Open. The contract was originally slated for two years, but Warne continued working with 888poker through 2014.

Most recently, the World Poker Tour made its first foray to Australia. The WPT Gold Coast tournaments were greatly anticipated, and Warne was there for all of it. He was excited that such a big brand had come to his home country.

On his website, he dedicated an entire page to poker. He wrote, in part:

“I absolutely love playing poker and the nature of tournament poker. It’s something that resonates with me as there are so many similarities between poker and cricket, especially when you have the opportunity to play at an elite level.

“Taking on the best players in the world is an environment where I thrive on the challenge.

“I draw many similarities between tournament poker and test cricket. Each are long and grueling events that can be broken down into many smaller contests. In cricket, I’m focusing on ball-by-ball, over-by-over, session-by-session, one batsman at a time. I poker, you can only play one hand at a time, one opponent at a time. If you can win more than your fair share of the smaller contests, over time, they will add up to success in both endeavors. Patience is the key.”

Warne also mentioned the mental stamina required to play both games well. He noted that it is important to relax during downtime but focus completely in the game.

Poker will miss Shane Warne for many years to come.